However, maybe it was the 50th Anniversary of when Yates and Seneca county joined Ontario county to form Finger Lakes Council. I am not sure entirely on how that happened. Maybe some history buffs out there will let us know how it really happened. However in light of Finger Lakes Council’s 50th anniversary, a council Camporee was held at Babcock-Hovey.

BABCOCK-HOVEY – For those boys who experienced their first time at troop camping at Babcock-Hovey, this weekend’s observance of the Finger Lakes Council’s 50th Anniversary Jamboree was a good way to start. For the older boys and the men who participated it was also a happy experience. Even the weather man did his part and provided the best weather this year.

The jamboree began at 4 p.m. Friday when somewhat over 1,300 boys and men arrived at the camp to set up their tents and get acquainted. By Saturday

morning when the activities got under way, there were 2,000. The large cleared field was set off into four separate camps: Ernest Thompson Seton, Daniel Carter Beard, James E. West and Robert Baden. Powell. The boys began the work of erecting a gateway at the entrance of each of the troop campsites. The gateways varied according to the wants and ambitions of the troops. Some were nothing more than a pole stuck in the ground with a troop flag fastened to it. Others were quite elaborate.

tower about SO feet high at the entrance to its camping area. David Weidman of Troop 96 in Palmyra won the bugling contest He then had the honor of being the official bugler for the duration of the jamboree. All day Saturday was spent in special events and contests. These ranged from knot being to fire building, from astronomy to lighting a fire with a hand axe.

Saturday night there was a big campfire and fireworks display, two special moments, dear to the heart of every Boy Scout. There were church services, Sunday

ecology event. It turned out to be a giant KP assignment, the oh’s and baah’s could be heard clear down to the lake. Many of them probably guessed what it would be beforehand. The theme of the jamboree was “Save Our American Resources”. At the end of the time limit the boys bad filled 376 plastic bags and had gathered up innumerable pieces of trash that wouldn’t fit into the bags.

First place winners in the ecology contest was Senior Troop 111, Troops 126 and 82 tied for second. As the time drew near to go back home, the boys gathered in a rectangle around a blue cross to the right of the field. Before the awards were to be

announced, the boys were to see a sky diving act.

After waiting about 15 minutes a plane flew overhead. It passed over but proved to be just that, a plane passing over. Another 30 minutes went by and some of the boys saw someone jump from an airplane, far off to the east Coincidentally, as 100’s of boys waited to see their sky divers, members of the Ovid Parachute Club picked that moment to jump from a plane. Another 10 or 15 minutes passed and then the right plane arrived and began to circle the field. The second time around a yellow streamer floated out of the plane. The divers were checking the wind velocity.

Suddenly four tiny dots separated from the body of the plane and soon the dots took on the appearance of four men suspended from four parachutes. Before the plane’s arrival the boys had been warned to remain standing and not to move around, for their own safety and the safety of the sky divers. The boys obeyed the warning but it proved to be for nothing. Although the sky divers tried desperately to land in the spot reserved for them, the strong breezes carried them elsewhere. One of them nearly made it. He landed in the back field just beyond the perimeter where the boys had gathered. The other three men landed in the woods. 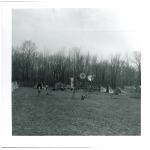 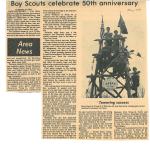