You might think it is weird that we start the story about Camp Babcock-Hovey with another Camp, Camp Tarion. However it is important to set the stage, a stage that is currently empty and waiting for the actors to come out. Camp Tarion was on Canandaigua lake and was only accessible via boat during the summer times. This made it difficult to bring supplies in. The steep hills did not offer as much space as was needed to operate a scout camp. Supplies and coal had to be brought in via boat to keep the generator running and the fridge full. It became apparent to many that Camp Tarion was not meeting the needs of Scouts and Scouters in the Finger Lakes Council. So a quest to find a new camp would soon fall in the lap of Judge Latham (Camp Selection Committee Chairman) and Mr. Gould (current council president). But before we jump ahead too much lets tell you a little about Camp Tarion. 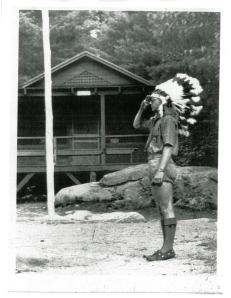 Formal Scout camps in the 1920’s were much more rustic than today. Army surplus was the order of the day and “home made” the rule more than the exception.

Although it included 286 acres of wooded hillside and a mile of waterfront, the Finger Lakes Council’s Camp Tarion didn’t look like much by modern standards until 1928. Located in Yates County along the southeast shore of Canandaigua Lake, there were no roads in, the power source was literally driven over the ice, and headquarters was a tent. Nevertheless, the Council was justly proud of its first camp. When Scouts first went to camp, they arrived as individuals, not troops. This was changed in 1934. After that year, Scoutmasters escorted their troops for one week periods although more time was allowed. Those who chose to provide their own equipment, provide their own leadership and cook their own food paid $1 per boy per week in the mid-1930’s. A troop of eight or more boys could go for a flat fee of $5 in 1936.

In 1929 a new lodge was opened. That 60 foot by 30 foot building had a general assembly room with a eight foot fireplace, a dispensary, a canteen, offices, cooks quarters and work room. The 10 foot by 60 foot porch was often crowded. The trading post/canteen was, of course, much smaller than modern boys would expect. Old time campers relate that the coin of the realm was scrip. Accommodations for the boys were the traditional military style squad tents, erected on platforms in later years. Campers with -at least a year’s experience were allowed to occupy “lone point” down by the lake. A mess hall, with room for 100 people, was erected on the lake shore. It is the only original structure on the old Camp Tarion site.

From the start the Council Camp staff had been comprised of individuals, professionals and volunteer Scouters with varying expertise. A regular feature of early Scout camping was “skinny dipping” in the morning. That practice was an important factor in the closing of Camp Otetiana, but seems to have been common in the 1920’s and 1930’s. For obvious reasons waterfront activities were important at Camp Tarion. The bottom dropped off quickly in the lake there and diving close to shore was common though dangerous. The old steam engine, originally used for power, was pushed into the lake when it was no longer needed and boys often tried to dive far enough down to touch it.

A 25 foot motor launch was obtained by the council to complement six rowboats and a motor canoe. In 1936 the Geneva Rotary Club donated a 32 foot launch to the Council. Dr. Stephen Eaton, noted Hobart College naturalist and author, conducted classes on both land and water. Many Scouts found themselves plying the waters of nearby West River as a part of camp activities, and there were the inevitable encounters with nature which make a camping experience memorable.

Duty to country was also an important part of camp life from the beginning. Early Council literature reveals that merit badges were awarded only after passing a board of review and providing “definite affidavits to prove that he has been living up to his Scout Oath and Law the best he can.”

There were problems with Camp Tarion, however, most notable was the small size of the usable land surface. There always seemed to be only two directions: up and down. In the days when a 14 mile hike was required for First Class, and each camp had a Hikemaster, the steep wooded slope had some advantages. The only way into camp, short of a long hike, was by boat. No road came near camp. All food came by boat from Vine Valley or Woodville. Like the site of Camp Otetiana, camp Tarion is visible today almost opposite Woodville on Bush Point. Tarion still looks much like it did when the last Scouts left it in 1938, now privately owned a rough private road has been put in.

I am also posting the following items –

A 1935 Brochure from Camp Tarion

Letters about Rotary help in obtain a Boat for Camp Tarion