In 2003, Troop 43 renovated and rededicated the Chapel. The alter was moved so we could expand west for more seating and was made in to a nondenominational alter. The stones in the middle of the new alter were stones from the previous alter. There was also a small cross made from wood of the original large cross. Jack Halstead helped to spearhead this effort.

This photo was a donation to the Babcock-Hovey Museum this summer. It is labeled as a staff photo from the 1970’s. But what year? It looks maybe like a 2nd photo from 1977, maybe? Thats why we are asking you What-Is-It?

Whatisit? This is at the enterance to the chapel. 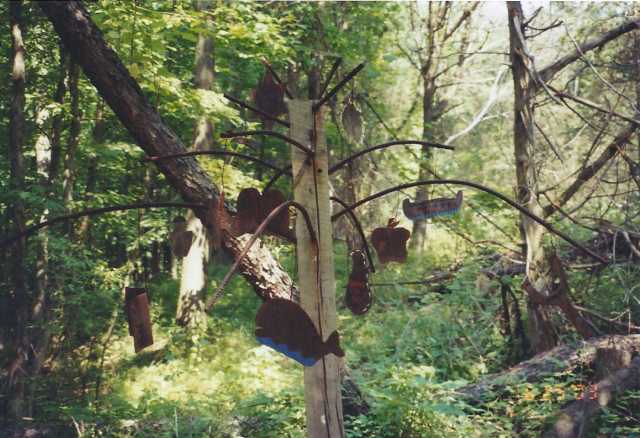 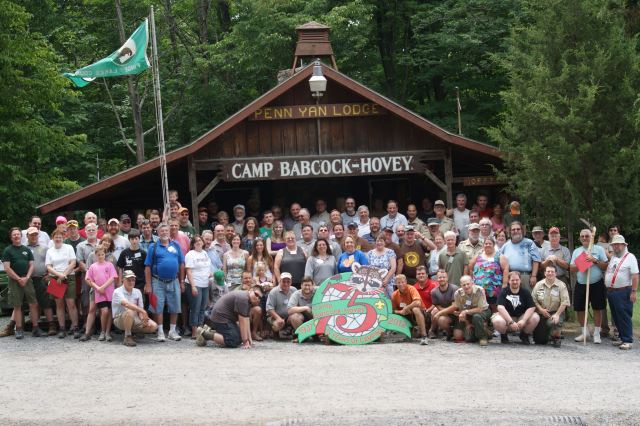 Who was this and why are they on staff??? (The girl in the uniform) 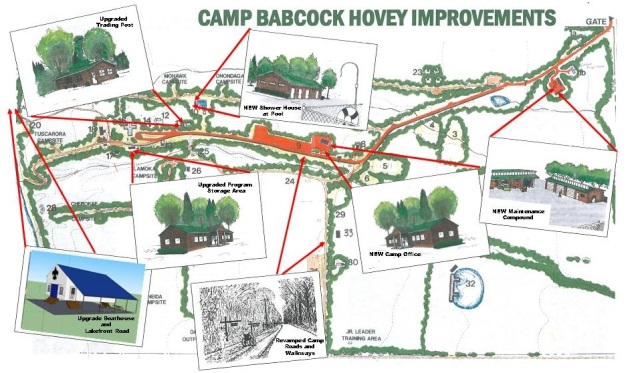 It would be impossible to list everyone that has ever made a major contribution to camp, whether it is fixing tents every year for 50 years like Joe Whitcomb, running a very successful capital improvement campaign like Victor Lonsberry, or being the Camp Properties Chairman for 20 + years like Hank Roenke. Those are just some of the names that come up in recent memory of camp. It is just impossible to thank everyone individually for their contributions to camp. Many of these names may fade into obscurity but the fond memories that were formed and  friendships forged at Camp Babcock-Hovey by thousands of Scouts and Scouters will not.

We want to bring from obscurity one person that caught our eye during our research of camp. There was an article in the July 14, 1941 Geneva Daily times that sparked our interest. In it the Honorable Nathan D. Lapham stated that in his “review of the 25-year struggle on the part of local Scout leaders to secure a suitable summer camp” that he would give “particular credit to Arthur J. Cowan and to Harry Weart, for having successfully completed the drive for the new camp”.

In 1932 Arthur J Cowan organized the first Sea Scouts Ship, Ship 3, and served as the first skipper. Ship 3 was sponsored by the North Presbyterian Church.

Arthur J. Cowan also led the 100 Eagle Scout salute to Birton Babcock and Harry Hovey  at the dedication of camp.

And lastly he served as the Finger Lakes Council President in 1945 and remained on the Executive board until at least 1961.

As for all the other work that was completed by Arthur J. Cowan, it is lost to the history books. Thanks goes out to Arthur J. Cowan and the thousands of others that have worked hard over the last 75 years to make Camp Babcock Hovey the Premier Boy Scout Camp in the Finger Lakes that it is today. It could not have been completed with out your donations and help! May Camp Babcock-Hovey be blessed with another 75 years that were as good as the last 75 years.

The CTC stands much resemblance to the old CANUSA Moteree’s that took place at Babcock-Hovey during the 1960’s except it did not take place at an alternative Canadian Location every other year. However Canadian Troops do attend the Camporee.

The 13th CTC Camporee but the first CTC to take place at Camp Babcock-Hovey was held Oct 14, 15, 16, 2011. It rained most of Friday and into the evening which resulted in decreased attendance. It was a wee bit muddy to say the least! Saturday was much better because the rain was on all sides of the Camp, but very little actually fell on the Camporee. Under the surrounding weather conditions, there was a fair turn out. When the final number were compiled, 1,368 people registered at the Camporee and had a great time doing as many of the 400 events as they could.

Below is a picture the COPE Team took from the top of the “Wall Climbing / Repelling Tower” showing some of the subcamps in the main field. 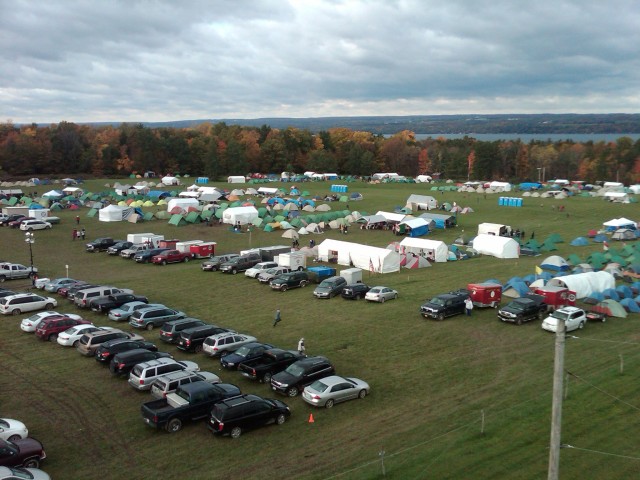 The Challenge Trophy Camporee is designed to be run by youth. The structure is based on subcamps and assigned event areas which breaks the entire camporee into manageable sections. Training is provided for the youth leadership team. The leadership team consists of Youth Camporee Chiefs, Subcamp Chiefs and Event Area Coordinators. The support youth staff is usually made up of younger scouts who wish to to be a leader at future CTCs. Adults are trained as advisors where they provide support if needed.
The Camporee program was built slowly but consistently “larger” over several years. The first CTC started with 50 events at the 1st CTC and by the 13th CTC (2011) we were over 400 events. At the 14th CTC we hope to run 450 events.

The Challenge Trophy Camporee (CTC) was started in 1999 with 2 Youth run Subcamps. The attending units competed for plaques and several had their Unit’s number engraved on a brass plate which is attached to the original Challenge Trophy. The CTC quickly grew so big that the “Trophy” had to be retired. At the 14th CTC we plan to run 12 Youth Run Subcamps and we offer ~175 plaques to be awarded to attending units for scouting excellence. We also provide Program Patches – Teamwork, Outdoor & Nature Skills, Chariot Race participant, Event Volunteer, Demolition Drag Derby, etc.

Check out thier webiste here-

The CTC is also known for its patches. Here are teh 2012 Patches- 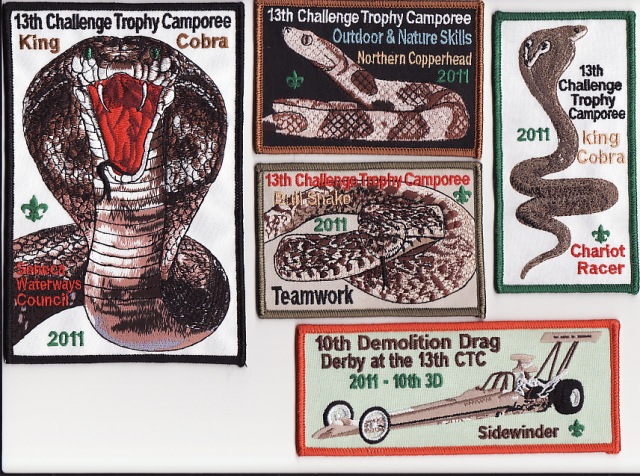 In the fall of 2010 Gary Pooler of Poolers (www.poolerenterprises.com) donated the machinery and man power to build a 1.5 acre pond in the southern back field or old tree farm area. It was built into a natural clay layer. There is no natural inlet so the pond is filling by natural rain water and by the summer of 2012 it was about 3/4 full. A dock was donated by the new Order of the Arrow Lodge “Tschipey Achtu” in addition to a wind powered aerator to help increase dissolved oxygen levels in the pond. It was originally stock with bluegills and large mouth bass. The Pooler’s Pond was dedicated in August 7, 2012.

Whatisit? I have always wondered what this was associated with…..