#9 The Dedication of Camp

The Dedication of Camp

Upwards of 1000 Boy Scouts, drawn from Seneca, Yates and Ontario county, participated in the event, witnessed by some 5,000 Scouters, parents of the boys and friends of Scouting, at the camp site, located on the east shore of Seneca Lake near Gilbert Station. The dedication marked a high point in the history of the Council and one of significance to American youth.

On a platform set up near the main lodge, but recently completed, overlooking the lake and the beautiful woods and ravines of the 144 acre camp site, a large group of distinguished guests paid tribute to the Boy Scouts and to the men whose gifts and effort made possible the establishment of the camp. Berton E. Babcock, Phelps, and Harry E. Hovey, Geneva, gave equal parts of $13,500 to purchase the site and erect the buildings

“Boys who have had a part to organized recreation are seldom met in court,” said Dr. Frank L. Christian, superintendent of Elmira Reformatory, the principal speaker of the afternoon. Dr. Christian discussed the value of Scouting to the community and to the boy. He cited the social, economic and educational advantages of Scout training and said that the national scope of the Boy Scout movement is of vital importance to the future welfare of the country.

“Almost without exception,” Dr. Christian said, “the boys who come to Elmira blame their difficulties on bad companions. They don’t meet them in Boy Scout troops. The Scout patrol unit is a gang, but a gang properly directed and practically trained. Records show that of the many thousands of boys arraigned to court there is an entire absence of Scouts and future good citizenship is assured in the lasting Effect of Scout training and camp life.”

A pertinent remark also made by Dr. Christian was that there is no such thing as a delinquent boy. It is the parents who are delinquent, he declared.

The program at the camp opened at 2 o’clock. More than 100 visitors and distinguished guests were entertained at luncheon earlier in the afternoon by Supreme Court Justice Nathan D. Lapham at the Geneva Country Club. Justice Lapham was chairman of the dedication committee and had worked for weeks on the program,

A Scout bugler, sounding” the “assembly” signaled opening of ceremonies at the camp and the enactment of a brilliant scene. Members of the commissioner’s staff directed a review of the 44 Scout troops at camp for the day. Members of the staff of Commissioner Arthur J. Cowan, Geneva, all of whom played an important part in the day’s program, were: Richard Rathbun, Phelps; John J, Pryor, Geneva; A. A. Gould, Geneva; Francis Orcutt, Penn Yan; W. O. Burgess, Seneca Falls; David R. Rolfe, Clifton Springs, and M. T. Munn, Geneva. 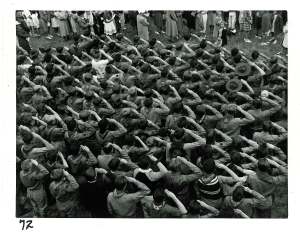 A flagstaff, gift of the Ovid Business Men’s Association, was presented by Anthony Wylie. A flag was presented by Winnek Post, American Legion, by Lyman H. Hammond, Americanization officer, and the staff and flag were accepted by Dr. Murray Bartlett, president emeritus of Hobart and William Smith colleges, for many years a favorite with Finger Lakes youth. The flag-raising ceremony was conducted by the camp color guard and the Romulus Central School band, directed by Maurice Rose, played the “Star Spangled Banner.”

Dr. Bartlett said in his remarks: “The flag stands first of all for the precious gift of liberty. The keynote of liberty is freedom of thought and speech, a liberty equaling tolerance, the note most needed today.

“There can be no freedom of thought and speech without tolerance which, in simple terms, means trying to understand the other fellow and work with him.” Dr. Bartlett also referred to the fact that Scouting unites all creeds.

The Rev. Raymond Nolan, Geneva, Council chaplain of Catholic Scouting, gave the invocation and all Scouts participated in the pledge of allegiance and the Scout Oath George Lawson, Dundee, Council president, gave the address of welcome. Eagle Scouts of the Council for years back were presented in a group numbering more than 100. By Arthur J. Cowan. The Eagle award was given to Wilbus Comstock, Troop 44, Penn Tan, by Harry Weart, chairman of the camp committee. Olier B. Barley Is scoutmaster of the Penn Tan troop.

One of the moat impressive parts of the ceremony was the presentation of the Silver Beaver Association, a group of men who for distinguished service to boyhood through the years of the Finger takes Council organization, have received the highest honor within the gift of the Boy Scouts of America. They are: Ira N. Croucher, Canandaigua; Edward C. Russell, Seneca Falls; Ainsworth M. Bennett,

In a dedication address, Charles S. Wilson, Hall, said in part: “Because of this camp we dedicate every Boy Scout in this Council to the renewed task of building a nobler character, of becoming a better citizen, for these attributes are the essence of Scouting. We dedicate even more-we pledge that every Scouter, inspired by these gifts, will give to the cause of Scouting in the Finger Lakes Council, from his experience, more of his time and effort than he has ever contributed before.”

Of the two men whose gifts made the camp possible, Mr. Wilson said: “Mr. Babcock and Mr. Hovey have achieved in industry and we recognize that their accomplishments have been great. By their contribution of this camp to the Boy Scouts, they have written their biography in the life of every Scout who camps here, and thereby given to that boy the incentive and encouragement to work and succeed that has been theirs.”

Requesting the two men to rise, Mr. Wilson led the hundreds of Scouts in a salute to them and in repeating the Scout Oath. “Thus,” he said, “we dedicate Camp Babcock- Hovey.”

Justice Lapham, who has been active in Boy Scout work for 25 years, recalled the names of men who have since passed on, which are familiar to all Scouters in the tri county area. Speaking briefly of their work he mentioned Charles O. Warner, Geneva; Milton O. Evans, Canandaigua; Oscar Johnson, Canandaigua, and Justice Robert F. Thompson, Canandaigua.

“That the efforts of these leaders were not in vain,” he said, “Is manifest today. Let us pause for a moment in silent tribute to the memories of those who carried the torch and in passing, intrusted it to us. Now we may say to the youth of these counties and to those Scouters who have contributed so freely and generously of time and substance: ‘We present you today with a camp home, to which you may come to enjoy its snowy slopes and winter stillness, or its lavish summer beauty above the waters of Seneca Lake. Now we have a Camp carefully planned and lavishly adorned by nature, secured and perfected for the needs of Scouting through the generous contributions of time, labor and money of men who understand.’ ”

Mr. Benson’s subject was “Building Men Through Camping.” He emphasized the importance of the great out-of-doors, the camping program as related to boy training and the building of men. Mr. Benson emphasized that Scouting and camping are the best preventives against the isms’ in America, the crime situation and the disappointments of life.

“In the Boy Scout Movement,” he said, “we ask every Boy Scout leader, volunteer and fine man connected with the movement, to give to the world America’s answer and that is that there can be only one answer and only one thing, first, last and all the time, Americans. We will be friendly to Russia and to other nations of the earth but we will not turn our back on Uncle Sam nor assist in organizing to destroy our homeland, nor will we aid or abet any other un-American group within our borders.”

Scouts had the’r part in the program in a special presentation, “Scouting on parade,” for which the various commissioners, scoutmasters and troops had been preparing for weeks . The entertainment was under the personal direction of commissioner Arthur J. Cowan and included a rapid-fire demonstration of Scout skill and training which was a revelation to many of the visitors. The demonstration, carried on by picked patrols, included tower building, signaling, fire building, life saving, first aid ,etc. Each of the five Council district participated, each having one part of the demonstration. 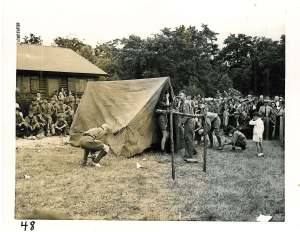 Fred D. Quinn, Council executive, had words of praise for the commissioners, Scouters and the camp dedication committee. He mentioned toe gift of Norman Gould, Seneca Falls, of a complete water system for the camp and cafeteria equipment for the kitchen. Mr. Quinn told of the months of hard work on the part of the camp committees, labor in the winter snow on the camp site, nights of study and conferences and weeks of volunteer tone. He described the physical aspects of the camp, explained its features and invited the guests to inspect the buildings, tents and area. More than 70 Scouts came in early in the afternoon for the second of the camp periods. Following Mr. Quinn’s talk, toe benediction was given by the Rev. Richard F. Wentz. Seneca Falls.

Much development work has been carried on by the Scouts since the opening of the camp on July 9. The boys are building nature study trails and have built a fence around the low bluff on the lake front. Other work has been planned. As is the custom in many Scout camps, the area has been divided into several “villages,” each equipped with large tents on wooden platforms, a frame toilet and washroom and water. The large lodge accommodates more than 125 boys at tables. There is a completely equipped kitchen, with living quarters for the cook and in the lodge is an office, first aid room, library and storeroom.

Another point of interest is the handicraft lodge where space under shelter is provided by groups of boys working on handicraft projects. According to the parents of the boys in camp, the new camp has met with enthusiastic approval from the first groups.

1 Response to #9 The Dedication of Camp